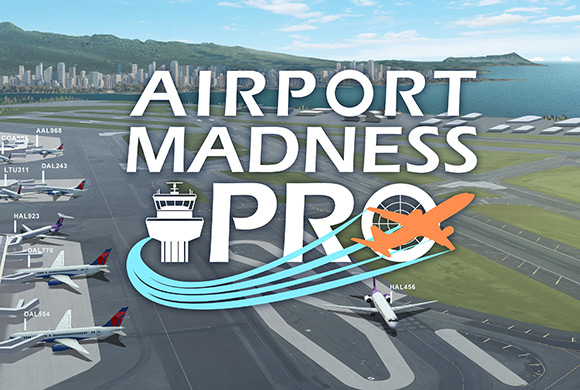 Airport Madness Pro is a game that I can’t wait to play.  This is the fancy name I’ve given to my next development, but inside my head I think of it as Airport Madness 9.  It is hard to believe that I’ve been doing this for 10 years now.  I remember finishing Airport Madness: Time Machine in 2012 and thinking, “What else can I possibly build in Airport Madness?“.  There are some realistic aspects of air traffic control that are extremely fun, and so far, missing from the Airport Madness series.  Applying real-world separation requirements is fun.  Separating a string of departures, each of different weight category and performance, requires a little more thinking than the current AM3D “whack-a-mole” style of ATC where absolutely anything goes, as long as the planes don’t collide.  This complexity, of course, could optionally be disabled.

Airport Madness 3D has taught me a great deal about 3D game development and the Unity development platform.  I’ve made countless mistakes over the past two years where I’ve told myself, “I won’t ever do THAT again”.  I feel much more organized than with previous versions of Airport Madness.  For example, a game begins with a Game Design Document, which I have recently finished writing for Airport Madness Pro.  It’s an instruction manual for how to build the game.  In earlier versions, I would start building the game straight away, and see what happens.

I’ve added some neat tools to my development process.  Google Sketchup the 3D modelling program I am using to design much of the game detail (with the exception of aircraft and terrain).  Speechmaker is a tool that generates multiple pilot voices for the game.  Instead of the standard three voices used since AMWE, there will be six in total, both male and female.

The aircraft types will be similar to that of AM3D except for the Concorde, which will be retired for AMP.  New paint jobs will be strikingly similar to real-world airlines, although despite using the actual spoken callsigns, I still want to distance myself from any Trademark issues by not putting any airline logos within the game, and maintaining a slight variation on the paint jobs.

I’ve spent a great deal of time this past month on airport and aircraft detail.  Much of the work has been experimentation, always asking myself, “What looks good, yet performs well across all devices?”.  I’ve come up with a new development method for airport surface detail (grass, runways, taxiways, lines and numbering) but it’s not quite ready to share with you.  However, I have finished developing the aircraft models (now they just need some paint!).