We have received a number of requests that our games be made available on the Android platform. It is our intention to bring our existing iPhone games to Android during the next few months.

Those of you with an iPhone or iPad can now try Airport Madness Challenge for free.  Although the full version still cost $4.99 for six levels of action, a ‘lite’ version is now available from the App Store which offers two free levels.  Additional levels can be purchased within the app for just $.99 each.


The high resolution of this app looks stunning on the iPad, although it plays well with iPhone and iPod Touch as well.  Perhaps the greatest leap this app makes beyond Airport Madness Mobile is the multi-player function.   Using Bluetooth you can play against any friend with an iPad, iPhone or iPod in either of two multiplayer modes: Tycoon Mode or Survival Mode. In Survival Mode it is a showdown to see who can last the longest without a midair collision. In Tycoon Mode your goal is to drive the opponent into bankruptcy.

As I type code for our upcoming air traffic control games, a question repeatedly comes to my mind.  Can a computer manage real air traffic?   Could we remove the human factor from radar screens everywhere, and let a computer make these decisions?

A computer is able to observe altitudes, speeds and headings, as well as flight plans. A computer is most certainly capable of broadcasting comprehendable air traffic control instructions to pilots. The coded algorithms required to make such decisions is not rocket science, either. In fact, many of our air traffic control games require some degree of ‘intelligence’ to detect and resolve traffic conflicts.  In Airport Madness 3, airplanes see each other and make decisions regarding who should stop and who should go.  In our radar game Air Traffic Controller, the system recognizes vertical and lateral losses of separation.

This technology already exists in parts of the world, although it’s focus is high-level enroute situations.  How hard is it to change a pilot’s flight level, or give the occasional mach assignment? Passing traffic information would be very easy for a computer. Coordination with other sectors, even human ones, would be spot on.  However, I am reminded of a drive I made recently through a remote area of Ontario, Canada. I encountered a complete road closure necessitating a backtrack and a complete reroute to my destination. My GPS (I don’t carry roadmaps) insisted that I get back on the highway in spite of the closure. I had absolutely no way of determining what other routes were available to me and finally had to pull over to get some human advice on how I would reach my destination.

Computers are great, but when the situation is anything but normal a human brain is needed. In air traffic control things are seldom ever normal, except perhaps in the high flight levels where aircraft cruise steadily and predictably. Where things can fall apart are the unusual circumstances, which happen so often in ATC that they become almost expected.  Thunderstorm activity, icing, turbulence, emergencies, loss of radar, re-routes, flow control, and airborne holds to name just a few.

Another big reality is the lack of radar information that exists in the world.  There is very little coverage out there.  If you were to look at a map of the world that depicted areas of radar coverage, most of you would be surprised at how little there is.  Granted, they are doing amazing and wonderful things with GPS these days, but at the moment there is very little radar, especially at lower altitudes and away from busy terminal areas.  There is almost no radar information over the oceans.  Computers make guesses, augmented by position reports from the pilots.

As a programmer, I can’t imagine the amount of code that would be required to detect and handle all of the possible situations that can unfold in the world of air traffic control.  In risk of sounding naive, I think this technology is still quite a ways off.

Airport Madness 3 has been online for exactly five months now.  On Facebook the free version has been played 1,207,555 times, and another 3,523,562 times on game portals worldwide, for a grand total of 5 million plays in 5 months.
As you can see by the graph below, Airport Madness 3 had a very exciting summer.  But in early September, I received a very friendly email from Facebook indicating that my application violated one of the facebook terms, in particular the part about not posting to people’s news feeds without explicit user consent.  I was very quick to correct that, but as you can see the app’s success has suffered as a result of this correction.

Facebook applications are scored by a number called “Monthly Active Users”, or MAU.  Airport Madness 3 on Facebook reached it’s all-time highest MAU on September 8, 2010 having 162,000 users.  Over the following 6 weeks it would plummet to 54,000.  Luckily, over the past month it has risen 10% from that low, daring to break 60,000 this week and projecting to break 70,000 by the New Year.
Game development has a huge learning curve.  It takes only months to learn how to program a game, but it takes years to learn how to promote and distribute your game.

An old classic.  Bob Newhart doesn’t need profanity to make things funny. For those of you not familiar with Bob Newhart, he is a terrific comedian who had a major hit comedy show in the 70’s.

So I’ve installed the latest version of Internet Explorer, IE 9 Beta. While I think it is a very decent browser, I was disappointed to see that I was unable to download our air traffic control games without receiving a security warning.  Some customers have complained of this issue too, and lately we have had to to point more and more customers to our alternate download files, which use the Adobe AIR installer. For some reason, Internet Explorer seems to trust the AIR format over the .exe format. Many malicious software developers choose the .exe format, so I don’t blame Microsoft for filtering ours.

We’ve also received complaints from customers who receive warnings upon downloading, such as “This publisher has not been verified. Are you sure you want to install this file?”.  This has prompted us to purchase a digital certificate, which does nothing more than reassure customers that the software they are installing is legitimate. 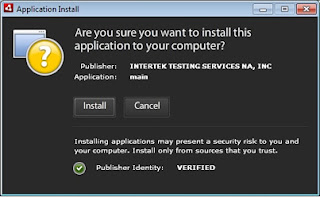 Digital certificates are not cheap, nor are they easy to obtain.  A company that wants to obtain a digital certificate to assure customers of their legitimacy must first convince a company such as Verisign or Thawte that they are, in fact, legitimate software developers.

Airport Madness 3, as well as all future developments of Big Fat Simulations, will be digitally signed for customer reassurance.

As we start the initial design of Airport Madness 4, I realize that we face exactly the same challenges as we did with the three previous versions of the the Airport Madness series.  Airport Madness 1, 2 and 3 all had something in common:  they were 2D, top-down games.  Airport Madness 4 however, will have 3D rendering.  That doesn’t mean you will need to wear the big ugly glasses, nor does it mean that the airplanes will jump out of the screen at you.  3D rendering means that you are no longer sitting up there in space, staring down at the airport.  You now have a seat in the control tower, watching airplanes scream by.

It’s not much, but this is technically the first official screenshot of Airport Madness 4.  Please be gentle with your feedback…we are still in the very early prototype stages of development. I promise to remove the green earth color that I stole from the 1992 version of Microsoft Flight Simulator.

Our challenge here is to avoid creating a realistic simulation.  Huh?  In my opinion, realistic ATC simulations are only fun to the hardcore ATC simmers.  To appeal to the rest of the world you need to keep things simple, fast, and entertaining, with no instructions required.  That’s not an easy task with something as difficult and complex as air traffic control.  We should have another update for this project in January 2011.