This month Air & Space Magazine give a nice printed review of Airport Madness 3D.   I had no idea they had done this, until a customer stumbled upon the review and was kind enough to forward it tome.  It means so much when I see a review like this. It makes all of the effort worth it! 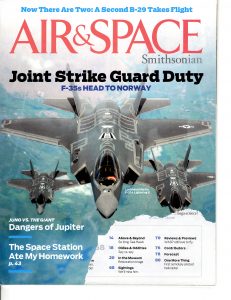 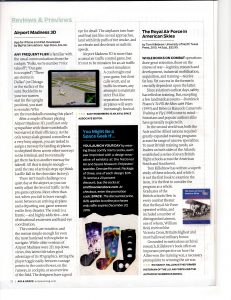 The “go-around” is an air traffic controller’s get-out-of-jail-free card.  It may be somewhat inconvenient for pilots and passengers, but it is a perfectly safe operation and often the 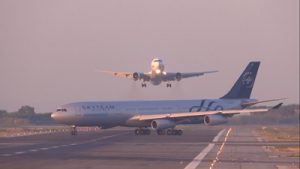 right thing to do.  A controller tries to move traffic as quickly as possible, but sometimes the timing does not work out, and they get a situation where an aircraft is about to touch down with another aircraft still on the runway. In real life, a controller is not questioned when they elect to “pull somebody up”.  In Airport Madness 3D prior to Update 1.121, go-arounds were free.  Don’t like what’s happening?  Simply pull somebody up!

Unfortunately, some players have learned that tremendously high scores can be achieved by pulling up large numbers of aircraft.  What a great way to maintain a tidy field!  Just pull everyone up!  You get no complaints about takeoff delays, and your stress meter goes way, way down.

To fix this cheat, in Update 1.121 I decided to force these go-arounds to circle back and join the 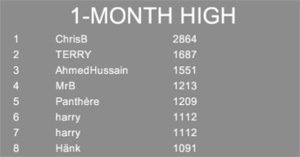 landing queue.  I thought it was a clever way to stop cheaters.  Unfortunately, very few players agreed.  When a player is legitimately trying to manage an airport, and they encounter a bad situation, they do what any real-life controller would do: they pull someone up.  When an Airport Madness player reaches the point in their game where they start issuing go-arounds, it usually means that their airport is in a state of anarchy.  And the last bloody thing they need is for the aircraft to circle back into the mix again!

So here’s what I’ve done with this morning’s Update 1.122: if an aircraft is assigned a go-around, the aircraft will climb straight ahead for eternity (to infinity and beyond!).  If you’re like me and you have too much pride, you’ll do the right thing and bring the aircraft back for a landing.  If you let it fly away, you’ll be left with a 1000-point penalty.  And you’ll also lose the 1000 points you would have earned for landing the aircraft.

I look forward to getting feedback from all of you on this.  I apologize for not being better about responding to comments on this blog.  You can always reach me quickly via email, or even better, by joining our Steam Community.

The good folks at Vancouver Full Indie were kind enough to have me speak at their July meet-up about my game development experiences. I gave my little talk, and they recorded it.  Please enjoy my sultry voice, questionable game design principles, and repeated use of the word “um”.

Or not. The talk is 12 minutes long. You could probably more enjoyably spend your time doing, say, ANYTHING ELSE.