For many years, people have asked me to give players the freedom to assign any runway to arrivals and departures in Airport Madness.  I know you all want the power to assign a departing aircraft runway 26L, an arriving aircraft runway 08R, runway 35 to another departing plane, then sit back and watch how it all plays out.  People want this game to feel completely real, and not be restricted by the artificial limitations imposed by me. 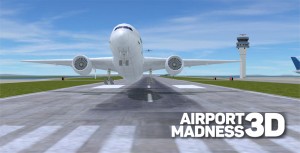 Having worked as an air traffic controller at five real-world airports, I can tell you that this is not generally how it works.  At a quiet airport, perhaps the air traffic controller will offer a pilot the runway offering the shortest taxi, or reduced flying miles.  They may even entertain the same thing for an arrival.  However, any airport that is even slightly busy will establish a sensible traffic pattern for arrivals and departures.    Take Las Vegas.  They will select a traffic pattern such as, arrivals to runways 01L and 01R, departures from runways 07L and 07R.  They’ll never sneak a 737 in on 19L because they want to be extra efficient.

The traffic pattern decision might be made by a supervisor (if there is one) or at a smaller airport, by the controller.  In either case, it is a decision that is made based on winds or noise abatement.  Once the pattern is established, it is not strayed from.  At least, not until the winds or airport conditions change.

With Airport Madness 3D I have tried to create what I feel is realistic.  While you are able to change the traffic pattern, this decision must be made at the beginning of each session.  In an early beta version of this game I tested the free-for-all scenario.  Besides discovering that it’s not much fun dealing with irreversible traffic jams, a very obvious problem came to light: how can the player untangle such traffic snarls on their taxiways?  Air traffic controllers have invented a special award that they give to their coworkers who create such jams.  It’s called the Golden Towbar Award.  Unless an airport has a thorough layout of taxiways, it is very hard to serve a single runway in both directions.  In the real world, airports establish a traffic flow and everybody sticks to it.

Designing flight paths takes up the majority of my development time.  There are so many measurements required, and so much testing to be done.  Developing a free-for-all game would quadruple my workload, and I don’t think it would be worth it.  I think most players would rather that time be better invested in other game features.

A huge thank you to Michael and Stefan Strasser for publishing this comic!
http://www.chickenwingscomics.com

About a year ago, I decided that it might be a great idea to offer free bi-monthly updates to our latest game, Airport Madness: World Edition.  Rather than penalize loyal customers by making them pay for more airports each year, I realized that there was a better way.  Not only is “free” a nice thing to do, it makes pure business sense.  Every two months since the launch, I’ve released a free update.  Doing so keeps the game fresh and alive on the worldwide web.  People talk about it.  They share it on Facebook. They tell their friends.  With every free update, I get a surge of sales.  Plus, the game has longevity.  AMWE is 15 months old now.  Historically, our games would be well into the “long tail sales”, meaning the income should be only at a trickle by now.

I’ve really tried hard to inform buyers whenever I release an update.  At first, I simply put out a newsletter stating that the update could be obtained by emailing me.  However, this turned into a huge task, answering thousands of emails manually.

I then experimented with an online tool that would accept your transaction number, then give you a download link.  However, this was full of issues.  Often, buyers simply didn’t have their reference number.  Sometimes a buyer would enter their transaction number, but my system would not recognize it.

In December, I sent out a special email to every email address associated with my list of buyers.  Many customers emailed me, asking if it was really us that sent it.  Apparently, the email somehow got flagged a malicious.

My latest idea was an in-game notification.  When the player reaches the main menu page of the game, a call is made to my server to see if there are any notifications, and posts them smack dab in the center of the player’s face.  The process takes roughly 1.5 seconds for someone with good bandwidth, but potentially much longer with slower connections. 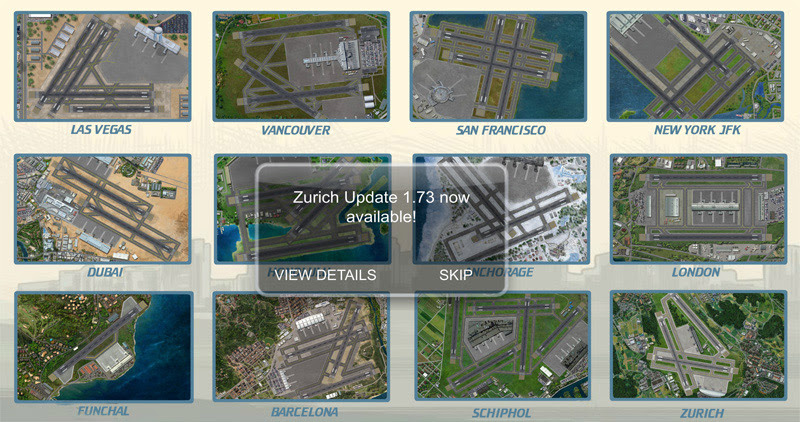 As of 5pm this evening, I’ve received more than 300 responses to my newsletter announcement of a game update.  None of these people received the update notification.  I feel really bad for someone who pays good money for something, then gets told there’s an update, but they have no way of obtaining it.  It’s not the image that I want for my business.  My next step is to improve the in-game notification system, so that it double-checks (even triple-checks) my server for such notifications and then lets the user see the information some place they can’t miss it.

I could spend forever perfecting such things, but each minute it requires puts me that much farther behind with the upcoming Airport Madness 3D, which is now looking like late March for a release.

I appreciate the patience everyone has with my system, and I sincerely hope that you all now have the Airport Madness: World Edition update.

We’ve added Zurich, Switzerland to Airport Madness: World Edition. We now offer 12 different airports to play from! Owners of the PC/Mac version will be prompted to install the update from the in-game menu page. iOS, Android and Steam versions to follow next week!

If you have not yet purchased, here is the product page:
https://bigfatsimulations.com/game/airportmadnessworldedition 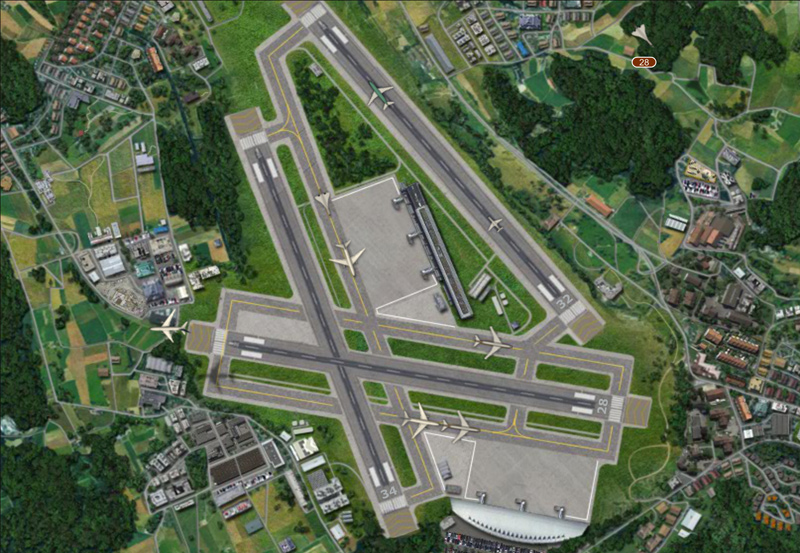 I’ve recently made my development process a bit more efficient.  In the past, I would release updates for each and every platform, only to feel overwhelmed when the inevitable bug reports land in my inbox.  When this happens, I then have to republish to each platform.  Because Steam, PC, Mac, iOS, Android, and Mac App Store versions all require special handling, it requires a full day of my time, just to fix something as simple as an incorrectly numbered runway.

This morning I released the Zurich update for Airport Madness: World Edition, but only to those who own the PC/Mac version.  Once I resolve the bug reports, then I’ll release this update across the other platforms.  Unfortunately, Apple usually requires a week to review such an update, so iOS will be the last to receive the update.