For the past three weeks, I’ve seen nothing except radar screens, and radar code. The most frustrating thing about this upcoming game is how much I enjoy playing it. Officially, it’s ‘testing’, but I’ve always loved ATC games and tend to get caught up in the radar scenarios.  I think this is going to be a fun game for everyone! 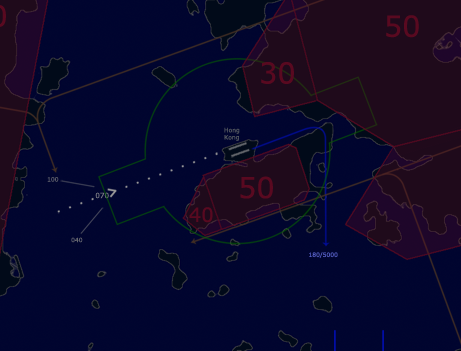 The above image is Hong Kong.  Lots of terrain in this sector, and all traffic funnels into a single approach path. I should remind everyone about something I mentioned in an earlier blog: RCWE takes a step backward from ‘realism’, in that there are no pilot voices, nor are the SIDs and STARs off the real-world charts.  This game is designed from the ground-up to be fun, with plenty of midair conflict points. 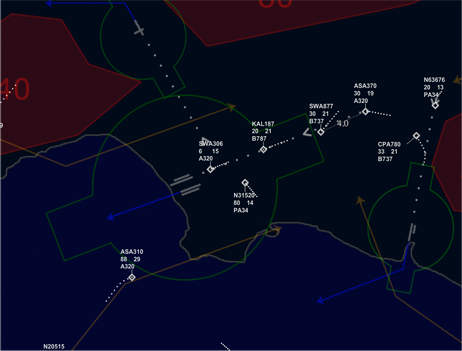 The above image is Los Angeles.  Plenty of traps in this sector!  Too many airplanes jammed into too small an airspace.  Fun! 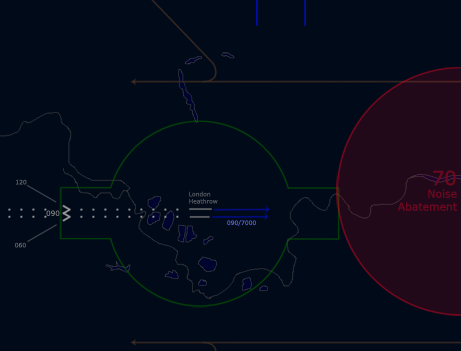 Above is London, which offers a ‘parallel’ operation.  You can have aircraft on ILS approaches side-by-side if you like!  This enables us to move lots and lots of traffic. 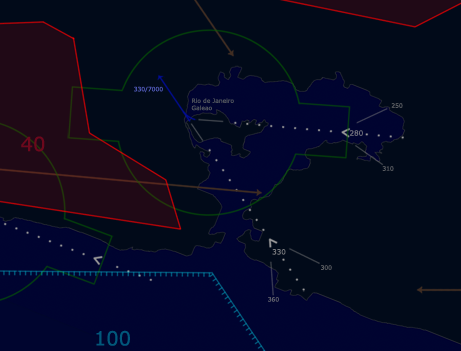 Rio de Janeiro is depicted above.  Please note that all maps are based on real-world charts and highly accurate.  In this sector, there is only one lie, in that we decided it needed some restricted airspace to the southwest, just to mess with you even more. 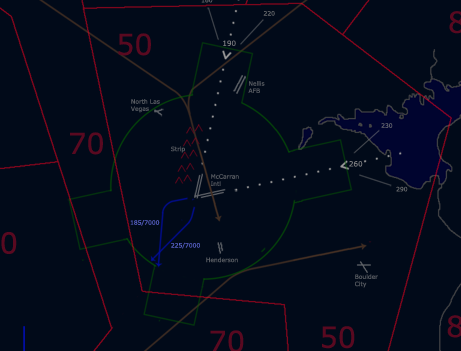 Las Vegas above.  Not sure if this sector is as fun as being in the city of Las Vegas itself, but guaranteed not to put you to sleep.  Plenty of terrain to watch out for here.  Radar Chaos: World Edition will be available May 31, 2014, on all platforms!

I got an email the other day from someone telling me, “The next words out of your mouth had better have something to do with the upcoming Radar Chaos”.  As always, I am fashionably late with my game deliveries.  I’ve been sidetracked lately with porting games over to the mobile space, something I really should have been doing three years ago.

I am now full-steam-ahead with real-world versions of both Radar Chaos and Airport Madness.  Here’s a screenshot of the Las Vegas sector in Radar Chaos: World Edition:

Las Vegas offers plenty of terrain, plus some bizarre flight paths, sure to keep you stressed out and gulping your coffee as you play.  This next version of Radar Chaos will offer 5 levels and sell for $9.99, available for PC, Mac, and most tablets.  Stay tuned!  I’ll post another screenshot in a few days!

Now that Backyard Brat is finished, it’s full steam ahead for our next air traffic control game, Radar Chaos: World Edition.   This one is guaranteed to raise your anxiety level. Based on real-world airports this time, RC3 will offer five difference airspaces, like Los Angeles shown below. The simulation will be based on the game engine from the very first Radar Chaos, but with improved graphics. The airspaces will contain real-world airport details, tailored to promote the likelihood of midair conflict. “Challenge” is our goal in this version.

The unofficial list of airport sectors included in Radar Chaos: World Edition are:

A Word On Realism

Those of you who have played the first and second versions of Radar Chaos may have noticed a large difference in the level of realism between the two.  The first edition was entirely fictitious.  The airports came straight out of our imagination, custom-designed to be challenging and fun.  The second edition was based on the Hawaiian Islands and was highly realistic, right down to the aircraft types for each airline.  Radar Chaos: Hawaii Edition had real-world SIDs and STARs, too.

Unfortunately, adding realism does not necessarily add ”fun” to such games.  In fact, the first version is still our favorite of the two.  We’ve received a few emails already, asking why the third edition of Radar Chaos is taking a step backwards in terms of realism.  We’re receiving the usual  feedback, like “How come you aren’t using real-world STARs?  Los Angeles arrivals should cross MERMA at 14,000 feet on the LEENA STAR, Fillmore Transition”.

I don’t know how to say this, but “real-world ATC” isn’t always fun.  If you are looking for a fun air traffic control game that’s highly realistic, you may not find one.   I love the idea of basing my games on real-world locations.   However, the routes and procedures will be at our discretion, with words like “fun” and “challenging” in mind.

The maps will be fairly realistic, but not spot on.  Take LAX, for example.  The range is inaccurate.  Burbank airport and Los Angeles International are actually much farther apart.  But how much fun would that be?  So we’ve lied here and there, in an effort to make midair conflicts happen more often.  I think you’ll like it.  It’ll be a fun game, I promise.

We really do value your feedback and ideas! As always, we can be reached at support@bigfatsimulations.com.  We never sleep, so feel free to send us your thoughts, 24/7.