There is an update available for Airport Madness 4, free to those who have already purchased this product. We’ve added some really cool effects to nearly all levels, and fixed a few minor bugs. I will admit to you, we’ve been sitting on this artwork for nearly six months, but have been too busy to implement it. There are still a few more pieces yet to be incorporated, but we will definitely get to it by Christmas. Most of these effects don’t happen right away. You have to patiently play, for roughly 10-15 minutes before these occur.

Level 2 (the City) now has smog. It comes and goes throughout the level, making it slightly harder to see the aircraft (as in real life). 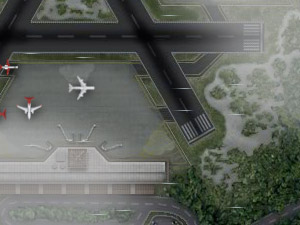 Level 3 (the Caribbean Island) has a “flood” effect that changes the topography during the monsoon. I really like this effect. Some may feel it’s a little “too soon” to be making video games about flooding, but we assure you, this was in the production pipeline since May. I find it darn near impossible to control the situation with the clouds rolling over top of the airplanes. A few updates ago we came close to removing this weather, but one of our users pointed out that it is entirely real. Air Traffic Controllers sometimes cannot see airplanes when there is poor weather. 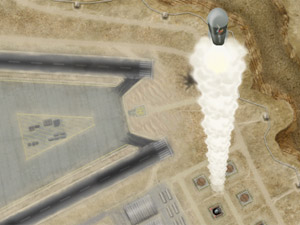 Level 4 (Area 51) gets a couple of cool effects added. At the beginning of your session, the airport gets hit with a terrible sandstorm, which looks like a ghostly orange gas, but if you look closely, you see the entire topography get blanketed and partially buried with sand. Later on in the sequence, after the military training flights rip across the airfield, and after the pilots start complaining about seeing strange things, and after the odd red gas appears, and after the bright flashes, and after the UFO sighting, everything kind of settles down to normal. That’s when the military decides to do some heat-seeking missile experiments, which don’t end well. 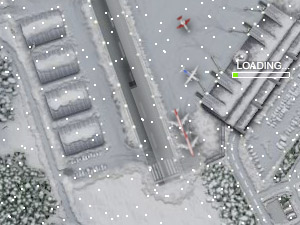 Level 6 (ski resort level) gets proper runway snow removal activity.  Once the snow storm hits, the supervisor informs you that one of the runways is closed due to snow removal.  Scramble to get arrivals moved to the other runway, while holding those departures.  Watch the pretty snow plows clean the runway, strip by strip.

We’ve had issues with planes jamming up on congested aprons.  With each new version of this game, we learn stuff.  So we’ve borrowed some of our hot new code from Airport Madness 5 and stuck it into Airport Madness 4 and it seems to have done the trick. Hopefully no more issues.

Definitely grab the update, as I promise you will like the additions. If you haven’t bought Airport Madness 4 yet, you can get it here.

There are new screenshots available on the Airport Madness 4 page!  Check back here weekly for more good stuff.  We are extremely excited about this project and hope that you will be, too!

Airport Madness 4 is making super progress! When the blog is quiet, it means we are hard at work 🙂 We have a terrific artist and an expert coder working on Airport Madness 4. We still intend to tease everyone a little longer by not posting screenshots, but we assure you, they are coming. We will also be posting a video next week RIGHT HERE that will show a sneak peak of this exciting project!

The first version of the Airport Madness series was released just over two years ago – December 29, 2008.  It was our first non-radar air traffic control game, and quickly became popular on many game portals.  On June 1, 2009 we launched Airport Madness 2, which offered players two airports instead of one, plus an improved control panel. It was a dramatic improvement over the first version, and made it onto Facebook a few months later.  Airport Madness 3 arrived on June 30, 2010, offering a much larger resolution, new airports, improved graphics, pilot voices, additional aircraft commands, and lastly, emergencies.

I have blogged very little regarding Airport Madness 4.  AM4 was intended to offer “3D rendering”, which would give players a visual perspective from the control tower,  instead of playing the game while looking down at the airport from outer space.  While this is a very cool idea, it’s an entirely different concept from the rest of the Airport Madness series.  The 3D concept deserves a separate entity.  “Tower Madness” is in the works for 2011, following the release of AM4.

AM4 will be a dramatic improvement over AM3, offering all of the special items that didn’t make it into AM3,  including a much broader choice of airports.  Perhaps the most common request that we receive is for additional airports and levels.  Here is a list of proposed improvements we hope to offer in Airport Madness 4:

We do not offer a release date as this tends to be a difficult thing to predict, and it often becomes an unfulfilled promise.  However, our goal is the Summer of 2011.

As we start the initial design of Airport Madness 4, I realize that we face exactly the same challenges as we did with the three previous versions of the the Airport Madness series.  Airport Madness 1, 2 and 3 all had something in common:  they were 2D, top-down games.  Airport Madness 4 however, will have 3D rendering.  That doesn’t mean you will need to wear the big ugly glasses, nor does it mean that the airplanes will jump out of the screen at you.  3D rendering means that you are no longer sitting up there in space, staring down at the airport.  You now have a seat in the control tower, watching airplanes scream by.

It’s not much, but this is technically the first official screenshot of Airport Madness 4.  Please be gentle with your feedback…we are still in the very early prototype stages of development. I promise to remove the green earth color that I stole from the 1992 version of Microsoft Flight Simulator.

Our challenge here is to avoid creating a realistic simulation.  Huh?  In my opinion, realistic ATC simulations are only fun to the hardcore ATC simmers.  To appeal to the rest of the world you need to keep things simple, fast, and entertaining, with no instructions required.  That’s not an easy task with something as difficult and complex as air traffic control.  We should have another update for this project in January 2011.

There has been great change in the casual game industry over the past couple of years. More and more users are looking for games that can be played socially on facebook, or on their mobile devices. Our most successful game, Airport Madness 3 for PC/Mac, fits neither. It is simply a downloadable application. While it is our intention to release an Airport Madness 4 in 2011 in a similar fashion to its’ predecessors, we can’t overlook the shift in the gaming industry.

Lately we have been developing quite a number of iPhone/iPad applications, such as Airport Madness Challenge, Airport Madness Mobile and Will It Fly. We are not overlooking Android, which happens to be next on our list. It is our intention to build out many of our existing PC/Mac games for both iOS and Android. At the same time, we are working on a social game for facebook, of the airport variety.

We also have a few entirely new game ideas that break free from our air traffic control theme. These will initially be introduced as flash games and later ported to Android and iOS. 2011 should be a very busy and exciting year for us, so please stay tuned.