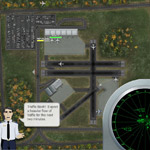 Airport Madness 4 is progressing smoothly, and we are still hoping for a December release.  Check out our first official screenshots here on the product page.  At this point, Airport Madness 4 is mostly functional.  We have added radar, an achievement system, multiple aircraft types as well as emergencies.  The game graphics are almost complete.  For the most part, the game requires only polish.

There is still artwork to be completed, as well as sound implementation for voices, music and game sounds.  On the back end, there are a few game levels that still need coding to be completed.

This may sound more like a “rant” than a progress update, but ranting is an important part of the whole process.  I’ve received a great deal of pressure from other game developers who insist that the game be Facebook-friendly and social.  “Add virtual currency.  Add micro-transactions so that players can build up their airport.  Add a feature that allows friends to challenge each other, or even work together.”  Believe me, I think all of this stuff is neat, but it’s an incredible amount of work.  I’ve seen developers get so busy adding the back-end magic, they forget that they are supposed to be building a great game.  And that’s what Airport Madness 4 is trying to be.

One thought on “Airport Madness 4 Update”