Years ago, before I started building games for the web, I had aspirations of becoming a professional website designer. Remember back when people would make websites for themselves? Then they would brag to their friends, “Hey, check out my awesome website. I built it myself. It has pictures and links all over it.”. In 2004, I was busy building crummy websites for others. I was completely self-taught from an extensive personal library of “For Dummies” books, but aside from that knowledge, I really had no idea what I was doing.

A friend once suggested that I not refer to my web design company as “I” or “me”. Rather, he suggested I use the terms “we” and “us”. He didn’t want me to appear as “some dude in a basement with his laptop”, but rather, a large corporation occupying a 26-story building in downtown San Francisco. There is definitely merit to that suggestion. However, with game development things work a bit differently.

I hope you aren’t expecting me to answer emails at 3:25 in the morning.

As an “Indie Game Developer”, I compete with some huge app development companies. It’s become darn near impossible for an indie game to make it into the top ten games on the App Store. If I sell my games under the guise of a large corporation, people expect to have a certain experience. They expect Angry Birds for a buck. Since I charge 10 times that for my air traffic control games, I like people to know what they are getting, and who they are getting it from. I like to use the “I” and “me” words in my blog.

Niche markets like air traffic control games are difficult for large companies to profit from. If a large company builds an air traffic control game that is only going to appeal to 5% of all gamers worldwide, they aren’t going to sell enough copies to cover their costs. I think that’s where indies like me have a huge opportunity. We can keep the costs low. We can pause. We can change our minds, and make split decisions. No meetings required. No focus groups. That kind of agility does not exist in large game development firms. 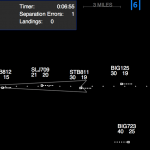 If I sold my stuff for a buck, I’d go out of business!

Plus, indie games are considered sort of cool. No, it’s not some 99 cent app you are buying, but an air traffic control game, developed by a real-world air traffic controller. It’s unique. Kind of special. Very niche. When I get a complaint from a customer, I like them to know that it’s a human being on the other end – not some large corporation that couldn’t care less about the ten bucks you just spent.

No, I don’t employ anyone to answer phone calls 24/7. It’s just me. I did incorporate last year, to keep things neat and tidy. I’ve never been great when it comes to paperwork, or keeping track of business matters. Honestly, I should have a full-time accountant and bookkeeper following me around, cleaning up after my messes. They could share an office on the 25th floor.

I like to think my customer service is excellent. I do own a mobile device, and can usually answer your emails within a few minutes.

3 thoughts on “Our Company”