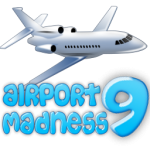 9 thoughts on “Moving Forward With Our Games”