Due to a number of minor bugs within the beta version of Airport Madness 3, release will have to be delayed a few days. I shall try to keep my promise of “June”, and will resist the temptation to delete all prior blog posts containing promises of release dates 🙂

I’ve received some great last-minute ideas that I decided to implement, including several emergencies. The tornado was not my idea, but that of my young son. He was insistent that it would be a crowd-pleaser, and even sketched out his vision of an air traffic control supervisor who warns of approaching doom. 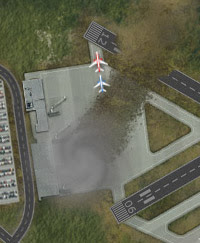