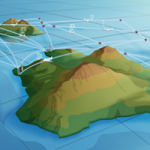 An update is available for Radar Chaos Hawaii Edition.  We’ve mostly fixed the numerous issues that existed in the High South sector.  A huge thank-you to everyone who has reported bugs to us.  We read and respond to every email, and do our best to process all of it.

While we do take all feature requests into consideration, we take bug reports very seriously.  If you know of a bug that has not been fixed, and is not on this list, it’s likely because we either could not reproduce the problem, or have not determined how to resolve the bug.

I’ve had more than one person report that certain aircraft will not fly an approach, but rather, will fly a holding pattern at the IAF waypoint.  This is one that we cannot find.   I suspect that the problem could lie within our instructions, as perhaps the correct procedure is not being implemented within the game.

Here’s the list of what we’ve fixed in this update: